Why most Student Athletes are Doing it Wrong:

Athletic development is a long process that involves a strong base of not only just proper movements, but proper "Athletic Movements". 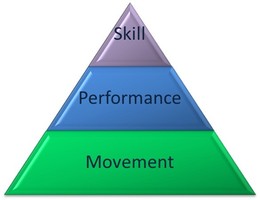 You have a good base of movement development on which you build your athletic performance and then top it off with the sports specific skill set for your sport of choice.

Unfortunately, the "modern athlete" goes about it all wrong, primarily due to the over-specialization of sports, primarily seen in our student-athletes.  As an example, they play soccer 11 months out of the year, going to soccer camps all season.  Or, they do nothing but play in hockey tournaments and go to hockey camps.

As a result, the "modern athlete" looks like this: 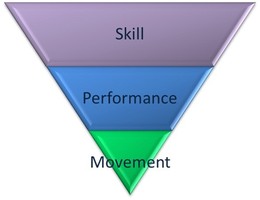 They don't train the basics and load on top the sport specific drills and movements.  As such, they have a weak base.  This has several outcomes.  It can pre-dispose the athlete to injury.  It also limits their upward mobility in the world of sports.

They don't get this training in their sport's practices either.  Coaches understand the importance, they just are very limited in regards to number of days of contact they can have and the amount of time they have for each practice.

A survey of coaches and AT's in the State of Wisconsin had more than 50% of them responding that they don't include the basic movement drills during the season due to time constrictions.

That is where Apex Athletic Performance comes into play.  We work with the basics.  We test the basics, we drill the basics.  We focus on those athletic movement skills that translate to all sports.   Sure, we do sports specific stuff too, but we ensure that a good solid foundation is present to build off of.

This article from Medical News Today agrees!  Click here to see it.